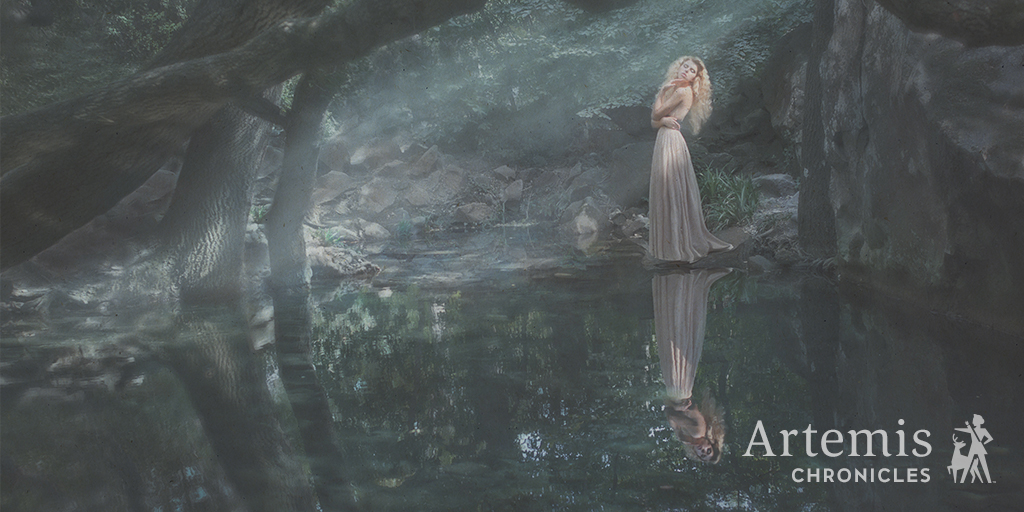 Continuing its eternal rhythm as the harsh winter gave way to a more forgiving spring, the pure white snow blanketing the forest slowly melted, once again revealing all of the treasures hidden below. After months of delicate silence, the forest erupted with sounds, sights and the joys of renewal. Green buds unfurled. Wildflowers speckled the thawed forest floor. Lushness filled every possible space.

And for the residents of the forest, spring was a time for coupling. Controlled by their inner instincts, birds tweeted seductive songs, the showy males attempting to win the females’ affection through warbling musicals. Rabbits chased each other through the meadows, frolicking at a very-much adult version of tag. Every doe in the forest preened and pranced, trying to catch the eye of Artemis’ virile stag.

Artemis could sense her stag’s interest, but loyal as ever, he stayed by her side as she silently sauntered through the forest. Later, when she was back home, she knew the stag would make his way to one of his admirers. It was only fair. After all, her own admirer would be joining her tonight.

The early spring sun filtered through the fresh, bright green leaves, illuminating her pathway and giving the entire forest a gilded glow. She noticed the bare patches that would later be filled with her lush and fragrant medicinal herb that loved to grow like weeds in this part of the forest. For now, she relied on the pots she kept on her windowsill, allowing her hearth’s warmth to keep alive what the winter cold cannot. Artemis could wander the forest for hours. For spring brought something new to discover each day. 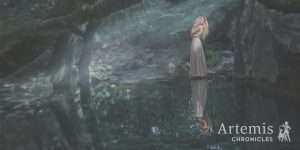 But for now her mission kept her on task. She had much to do and very little time to do it.  Her first stop was her pool. Fed by the cleanest of streams and naturally sheltered by a series of large boulders along the back, her pool was hers and hers alone. It was a place to cleanse her body, while also helping wash away any troubles fermenting in her mind. She gave her stag leave to wander off, as she knew there was a delicious patch of sweet clover not far away. She deftly removed her clothes, hanging them from a branch. As she stepped into the shallowest portion of the pool, her eyes glanced in every direction. She was indeed alone.

Ice cold from the thawed snow, the pool’s frigid water instantly invigorated Artemis, while also urging her to be quick about her business. But after becoming accustomed to the cold and after washing, Artemis allowed herself to linger. Just briefly. She spread her arms out and floated in the water, gazing at the forest canopy above. A fallen twig snapped. Artemis’ heart lurched and she jettisoned back into the water, so only her shoulders, neck and head were showing. Both wary and aware, she scanned the edges of the pool, looking for the intruder. Humans and gods alike were well taught to avoid this forest. This land is hers and hers alone. She laughed when she saw her stag approach, pieces of clover sticking out of his mouth as he chewed his last mouthful. It was her signal to leave. Artemis quickly got dressed. She was preparing for her own companion this evening after all. With one last glance up at the sky, Artemis left the pool and headed back toward home. One more stop remained.

Soon after, with a song on her lips and the bees buzzing in tune, Artemis approached her massive garden. In the back a large glass structure sheltered some of her herbs from the elements. Plants may be seasonal, but the need for medicine is not. No time for daily tending right now, she zeroed in on the exact herbs she needed and skillfully plucked only what was necessary today. As she kneeled before her sacred herbs she thanked the sun and the soil for providing the nourishment her plants desired to grow healthy and strong. As she left her garden she glanced at the stag resting in the meadow beyond. His belly full, his eyes closed, he was saving his energy for tonight’s pursuits.

Back inside she quickly lit a fire in her beloved hearth. As the flames grew she fluttered through the kitchen, gathering the supplies she needed to create one perfectly magical night. Placing two heavy pots on the grate over her fire, she poured water into the first and precious oil into the second. For tonight she was in the mood to entice. First would come the tea, exquisitely steeped with her fragrant herbs. Next would come the oil, expertly infused with the arousing herbs. She would massage her lover with the oil—a task none too difficult. And after that, well, that thought brought a heated flush to her cheeks. The creatures of the forest weren’t the only ones in the mood for romance. Even immortals-especially immortals-were lured by instinct.

Artemis sprinkled her herbs into both pots, not needing to measure precisely after years of experimenting and perfecting. As her ingredients steeped, her thoughts turned to the ancient medicine woman who, many years ago, taught her that her favorite medicinal plant also held amorous powers. The herbs weren’t forceful or strong… just enough to enhance what she and her companion were already feeling. While at the hearth, the room had darkened. Artemis rose to light candles, creating a warm glow to replace the dying sunlight. She heard footsteps approaching, heavy and urgent. Her heart quickened. Her lips parted. Her lover was here. 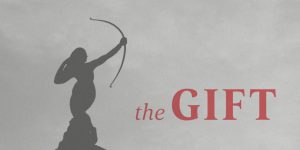 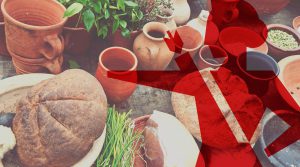 Part III: A Gathering of Gods 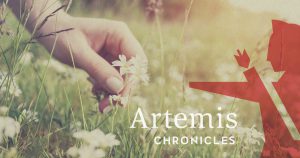 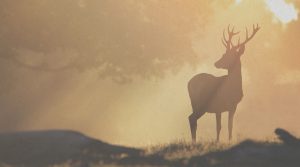